Here it is nearly summer. I have not done anything with this blog since December, but a lot has gone on in my life.  Farrah, the superb rabbit hawk, caught only one in Houston, another in Amarillo. So concludes the season of 2016/2017. Sometime late in summer, I will start a new page. Look for http://ciscoandfarrah13.blogspot.com/ around late August, possibly September or even October. 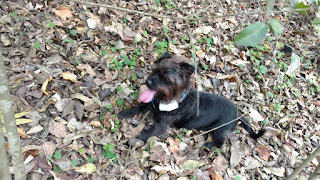 Arnold after a successful squirrel hunt 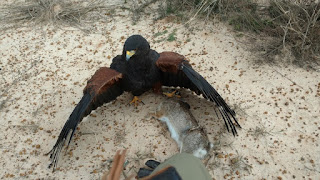 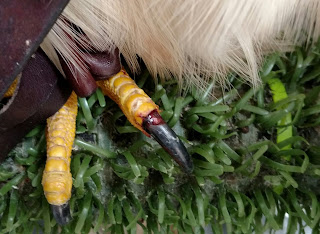 Cisco was on a tear with squirrels this season, then injured his talon. 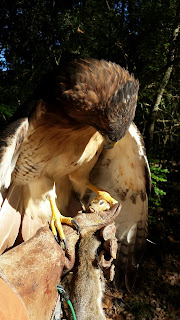 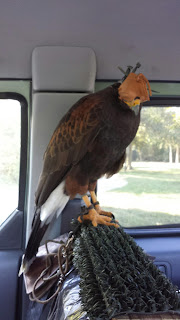 Here are Farrah and Dart in Denver, late January. 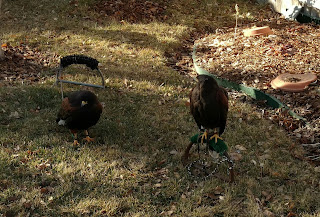 Posted by Chuck Redding at 9:08 PM No comments:

Joe Philabaum brought his rookie male Coulson HH out. He looked pretty good, maybe a little high in weight. Was not much hopping in the fields.

We brought Farrah out. She caught a bird and a bunch of large insects....

Posted by Chuck Redding at 4:49 PM No comments:

The Quick and The Dead

A nice couple from around League City came all the way to west Houston to see Cisco hunt squirrels. They saw only the aftermath. It was quite cold for Houston, with a breeze.

We released Arnold the dog, then Cisco who flew off in a usual direction. Chatting a little, we finished getting ready and headed out. Hmm, no hawk. Normally Cisco makes a big circle and comes back. Today, no sign so gave him a few minutes.  We went back to the Element and I turned on the receiver.  Powerful signal. Cisco was about eighty feet from the vehicle, munching on a squirrel on the ground. This happens very occasionally. Impressive from a prowess standpoint, but not much fun to watch....

I think having an ever improving squirrel dog makes a big difference.

Posted by Chuck Redding at 7:02 AM No comments:

Took Farrah out today to hunt non-existent rabbits. She caught a cotton rat and a bird. 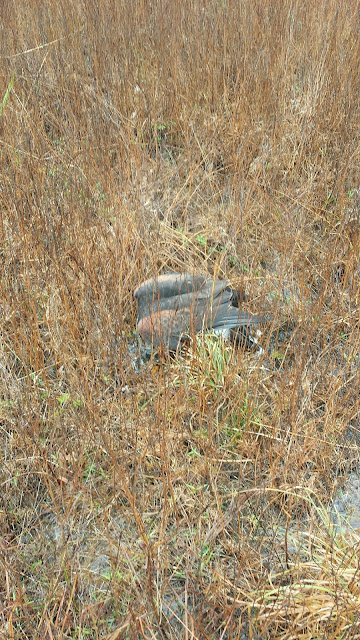 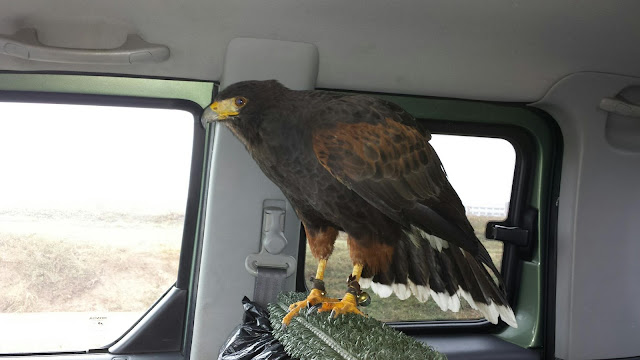 Posted by Chuck Redding at 5:49 PM No comments:

These are very slightly edited snippets of some texts I sent later:

He had a squirrel in a hole in a tree. At one point I was  trying to get climbing irons to climb a tree coming out of water. Cisco's battle went on for twenty minutes.

I was calling around for climbing irons. Swim to the tree and then climb it. He finally plucked the squirrel out and flew across the creek. 40 minutes later I was back at car.

I was afraid of a Great-horned owl picking him off as  he lay exhausted. It was starting to get late and was overcast. Getting stuck made zero sense but it sure looked like it. That video clip was only three minutes. (There is a YouTube video)

He had only one foot in the hole so he killed an adult squirrel with one foot. What a way to go. Cisco looked like he was in a snap trap. Thinking he might even break his leg along with everything else. His leg is abraided and may be from that.

He barely made it to the bank. I was digging into my pockets to toss my phone and wallet on the ground. It was a good sized cat squirrel and he was tired. He just sat there, wings hanging, and even when I hiked over to him he had just started to drag the squirrel. A nice swim.....

Wasn't too much fun, but great when over. Cisco is a hard headed SOB. 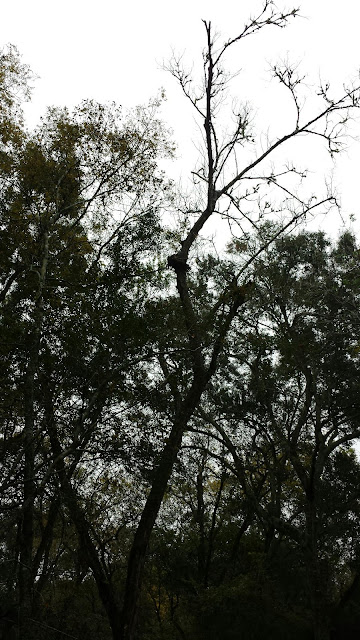 The lump in trunk of tree is Cisco 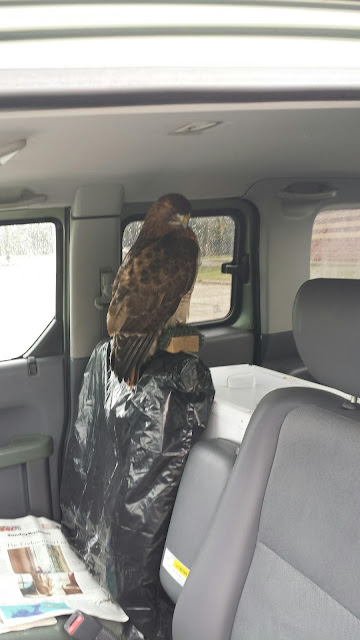 Not ready to resume hunting after rain delay 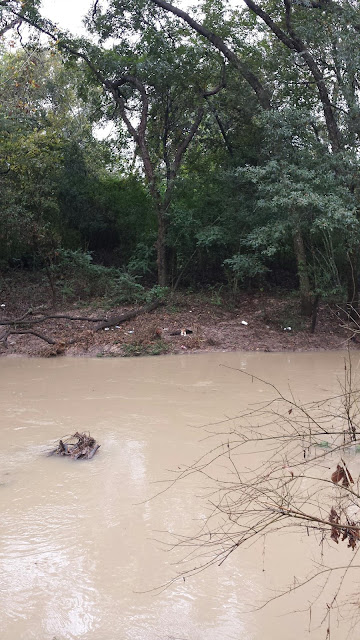 Across the creek of course
Posted by Chuck Redding at 5:30 PM No comments:

This morning Cisco caught a squirrel on a drey. It squealed; Cisco killed the squirrel up in the tree. The weather was nice, with finally a little cooling. I garnished the glove with squirrel treats from two days ago.  Cisco looked down longingly but took off across South Mayde Creek. Very close to the spot where he and a squirrel ended up about a week ago. I crawled across a debris bridge and my foot slipped. The water went half way up my calf, obviously filling my rubber boot. The joys of being an austringer.

I found Cisco with the squirrel. He had broken into it somewhat, having plucked the tail and eaten most of one of the front legs. See picture below. That's how I found him. I traded him off and we walked to the bridge. No creek crossing.

Last night I took Farrah out to try to get some rabbits. Caught birds instead. Spectacular flights. 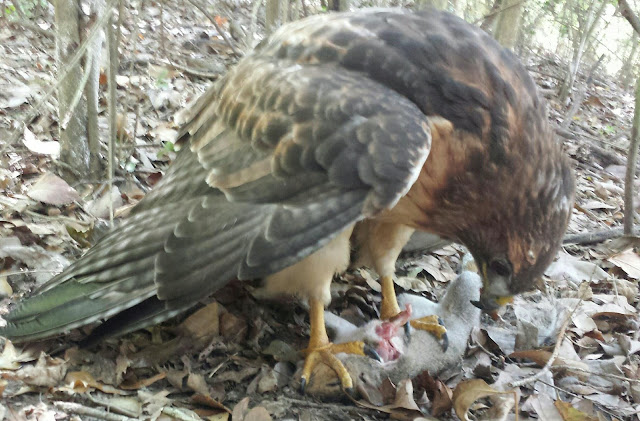 Cisco's thinking, "I just never get tired of these" 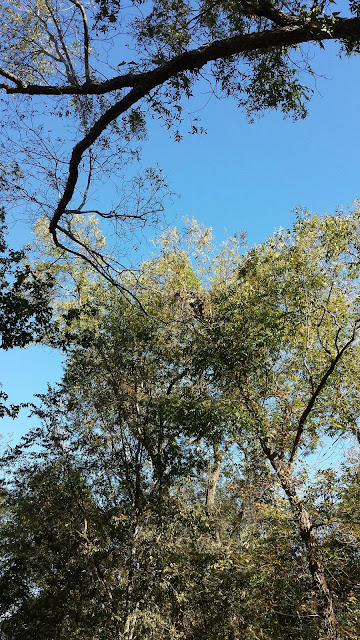 The dray is on the center. You can see Cisco and squirrel but not clearly 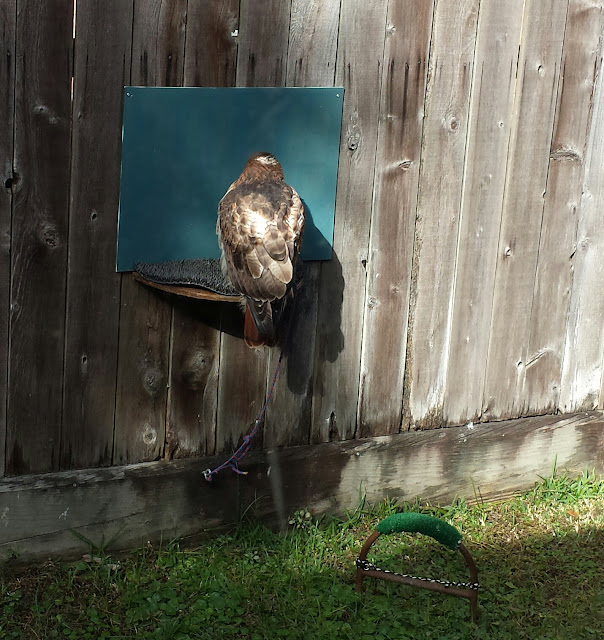 His first catch this season was not only lucky and perfect, but it was in the middle of our neighborhood where I usually don't hunt him for various reasons. But we saw an opportunity and took it. Yesterday's success was found in a spot that we have not explored that had less ground cover than the usual area. Immediately, we had several opportunities arise. This one he worked really hard for and managed to catch it after chasing it and two other squirrels up and down several trees. This is the first time he caught one chasing it as it was running down the tree and him right on its tail in a vertical stoop, catching him right as they hit the ground! He has chased them down the tree trunks like that before, but he always gets caught up in small bushy branches near the bottom of the trees. This particular tree didn't have that. 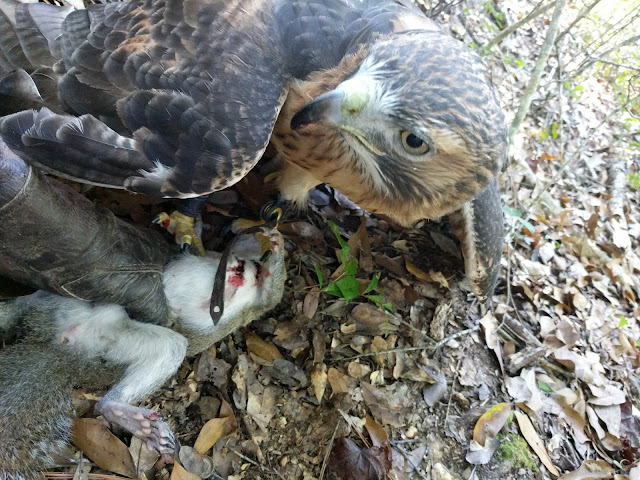 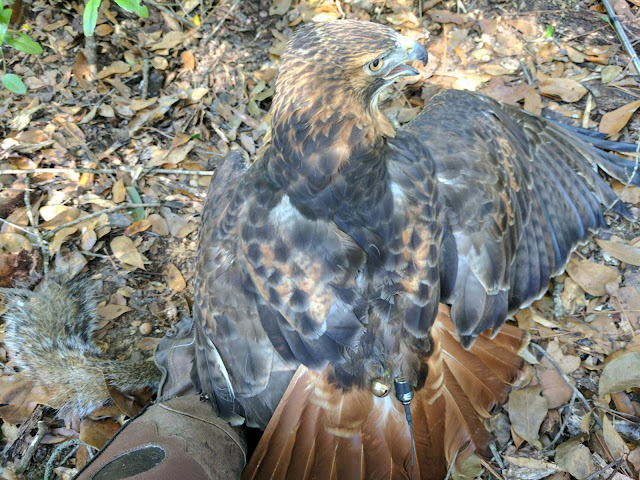 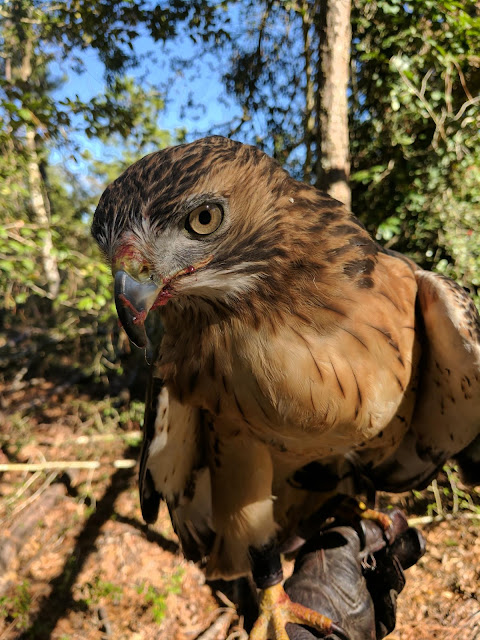 Posted by Chuck Redding at 5:14 PM No comments: